I’ve been using Google+ for a few days now and despite being a “limited field test”, it has a brilliant approach to privacy. If you are unfamiliar with Google+, take a look at this introductory video:

At Google+’s core is the Circles feature. Circles offers users fairly granular control over their contacts and what they share with who. Circles are a little like Facebook’s Lists (don’t worry if you’ve never seen those, they’re not clearly exposed to users) and Twitter’s Lists. Using Circles you can allocate contacts to Circles like Family, Friends, Acquaintances and pretty much whatever you want to call the Circles. Google+ gives you a few read made Circles but you can create your own. Here is another video introducing how Circles works:

Setting up Circles takes a bit of work because you need to go through your contacts and add them to whichever Circles you want to add them to. The interface is really slick and easy to use, a little fun even. Once the Circles are set up you have the option of publishing content to specific Circles or even specific individuals and this is where the brilliance comes in (at least as I see it).

Before getting into Google+’s privacy paradigm, its a good idea to revisit the Facebook and Twitter privacy models. Facebook tends to push people to share more publicly. Its defaults for its products tend to be more public than private and Facebook has made a few glaring mistakes where they have gone too far. Whether it be due to enormous public outrage or an evolving sense of how to handle privacy issues, Facebook has improved its practices but most users seem to be unaware of or unconcerned with the more granular privacy controls. The average user has few friends on Facebook and probably doesn’t think too much about the publicity issues and certainly doesn’t bother with lists.

Facebook has similar functionality to Circles and, in one respect, goes a little further than Google+. Yishan Wong wrote a handy description of this in his recent post on Quora critiquing Google+:

In fact, Facebook allows you to do everything Google+’s “Circles” feature do, including post things only to specific friend lists. Further, Facebook’s selective posting feature is more advanced than Google+’s. Not only can you post information to specific Facebook Groups of curated friends, you can do more exclusionary posting than Google+ 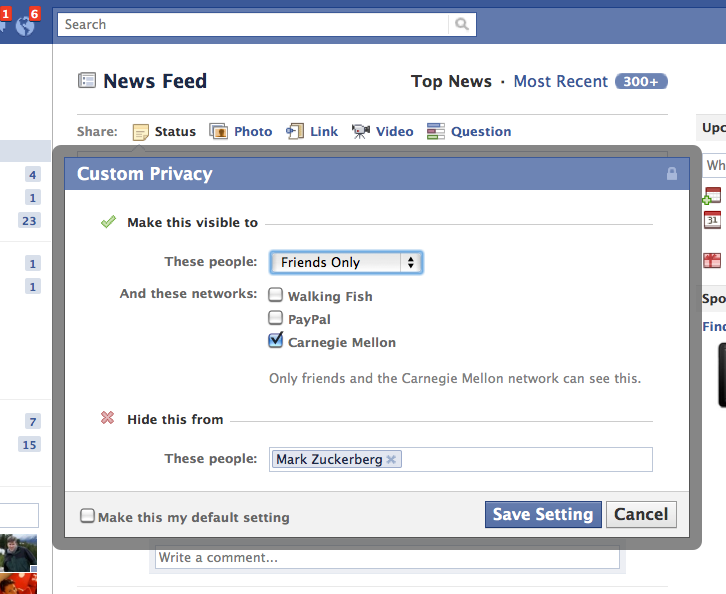 Despite the functionality being available on Facebook, few users actually use it and Facebook has pretty much buried it a couple layers down in the friends menus. That leaves many Facebook users left with a few choices:

Unless you only friend people who you are genuine friends of or are related to on Facebook, you may find yourself having friended people who you may not be comfortable sharing all your content with so you may elect not to share everything. While this probably hasn’t stifled Facebook’s growth, the model has limitations based on its structure and users’ preference to share more personal stuff on Facebook.

Twitter, on the other hand, has two privacy/publicity options: public or private. Anything tweeted publicly is public and you have no legitimate expectation of privacy. Its a little like standing on a street corner shouting out to whoever may be passing by. The private option is a little like going into a room and selectively allowing people inside to hear you speak. Twitter also has a Lists function which you can use to categorize Twitter users you follow. I have a number of lists on Twitter which include Communications and Marketing people; people I consider to be influencers; as well as other lawyers using Twitter. You can create your own lists and include whoever you may be following into those lists. As with your updates, lists can be public or private. I have a couple lists which I have kept private because they are meant for me, not everyone else. Lists are handy for when you want to focus on a specific group of Twitter users. I may, for example, switch from my general Twitter stream to my Lawyers list to see what those lawyers are talking about rather than try to single out their posts in my general Twitter stream of more than 1 100 people who I am following at the moment.

On Twitter you have two choices when it comes to publishing content: either publish your tweets to all your followers or don’t publish the tweet (you also have an option to Direct Message people on Twitter but its a one to one messaging system). There is no granularity. This binary choice means you may be reluctant to share something you only want certain people to see. That limits how you use Twitter.

Circles borrows from the Facebook friends model and Twitter Lists. Using Circles you can limit your consumption and sharing to specific Circles or you can publish to the Public stream. Unlike with Facebook and Twitter you have quite a bit of control over who to share your posts with. In this example below you can see that I elected to share a post with people in my Acquaintances Circle, Sergey Brin and Robert Scoble. I also have the option of sharing my post with people in my Acquaintances list by email (they are not yet using Google+).

Privacy is about secrecy and about informational self-determination (being able to decide how your information is distributed and manipulated). Jeff Jarvis made the point that if you engage in a social network, the point is to share so privacy as secrecy is less of an issue. On the other hand, the other aspect of privacy becomes even more important because you want to be able to decide who can see what you share. The level of control Circles gives users may alleviate any anxiety about sharing stuff intended for a limited group of people. I prefer to limit visibility of my photos of my children to friends and family and its one of the main reasons why I am fairly selective about my Facebook friends. On Google+ I can share those photos with friends and family in one post and publish an interesting link or a few thoughts completely publicly in the next post. I have more control over who gets to see my posts. Moreover, users also have pretty granular control over their Circles’ visibility (apologies for the cross-linking, I wrote about this aspect of Google+ privacy on my personal blog). This level of control makes Google+ far more attractive to users as a candidate for the one social network for all contexts.

Google has said that Circles are based on real-world interactions in that we tend to segment our contacts contextually. We have colleagues, friends, family, hobbyists and so on. Circles creates the infrastructure to recreate those contextual groups in a social networking environment. It is also important to bear in mind that Google+ is the latest and most publicized of a number of updates Google has rolled out and will be rolling out to make the Google ecosystem itself a social platform. Google+ is also still in a limited field test and isn’t open to the public just yet so it remains to be seen whether it will gain traction with mainstream users. Regardless of whether it does attract a large userbase, Google+ has demonstrated a very different privacy paradigm which addresses many of the criticisms levied against Facebook in the past.